What To See in Swanzey, NH – The Covered Bridges 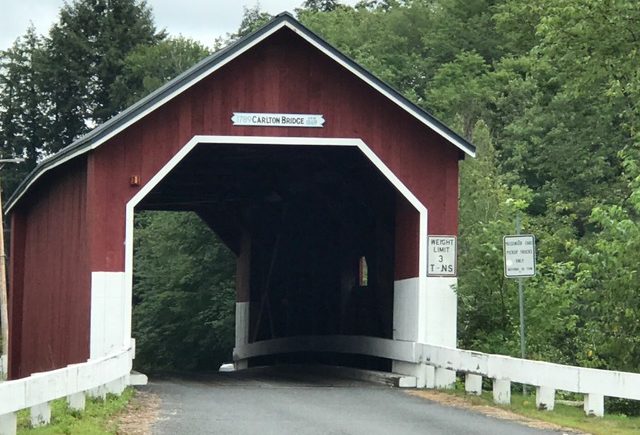 We love to explore covered bridges when traveling, so when we took an RV camping trip to Ashuelot River Campground, in Swanzey, New Hampshire, we picked up a flyer that takes you on a short road trip to see six covered bridges in the area.  While we were able to visit only three of them, we were amazed by what we saw and I encourage you, if you have time, take a drive to see all six of the charming covered bridges.

The Covered Bridges in New Hampshire

If you love covered bridges, you’ll want to take time to see these awesome bridges we found in Swanzey, NH! We were amazed at the restoration of some of the bridges and the history of each.

Many are listed on the National Register of Historic Places.

The Carlton Bridge, located East of NH Route 32 on Carlton Road, 1/2 mile south of Swanzey Village, is listed on the National Register of Historic Places.

The bridge spans the South Branch of the Ashuelot River.  The style of Bridge is Queenpost and was constructed around 1789.  The bridge was completely reconstructed in 1996.

According to local tradition, the bridge was built by local barn builders since its construction is similar to that used in bars.  A wagon fully loaded with hay was used as a standard for the height and width of the opening.

Cresson Bridge (also known as Sawyer’s Crossing Bridge) and is listed on the National Register of Historic Places.

Located in Swanzey, NY, the bridge also spans the Ashuelot River and is located one mile north of NH Route 32 near the site of an old Indian community on Sawyer’s Crossing Road.

The style is a Town Lattice Truss and was originally built around 1771.

A lattice bridge is a form of truss bridge that uses a large number of small and closely spaced diagonal elements that form a lattice. It was patented by architect Ithiel Town in 1820 and 1835 as Town’s lattice truss. 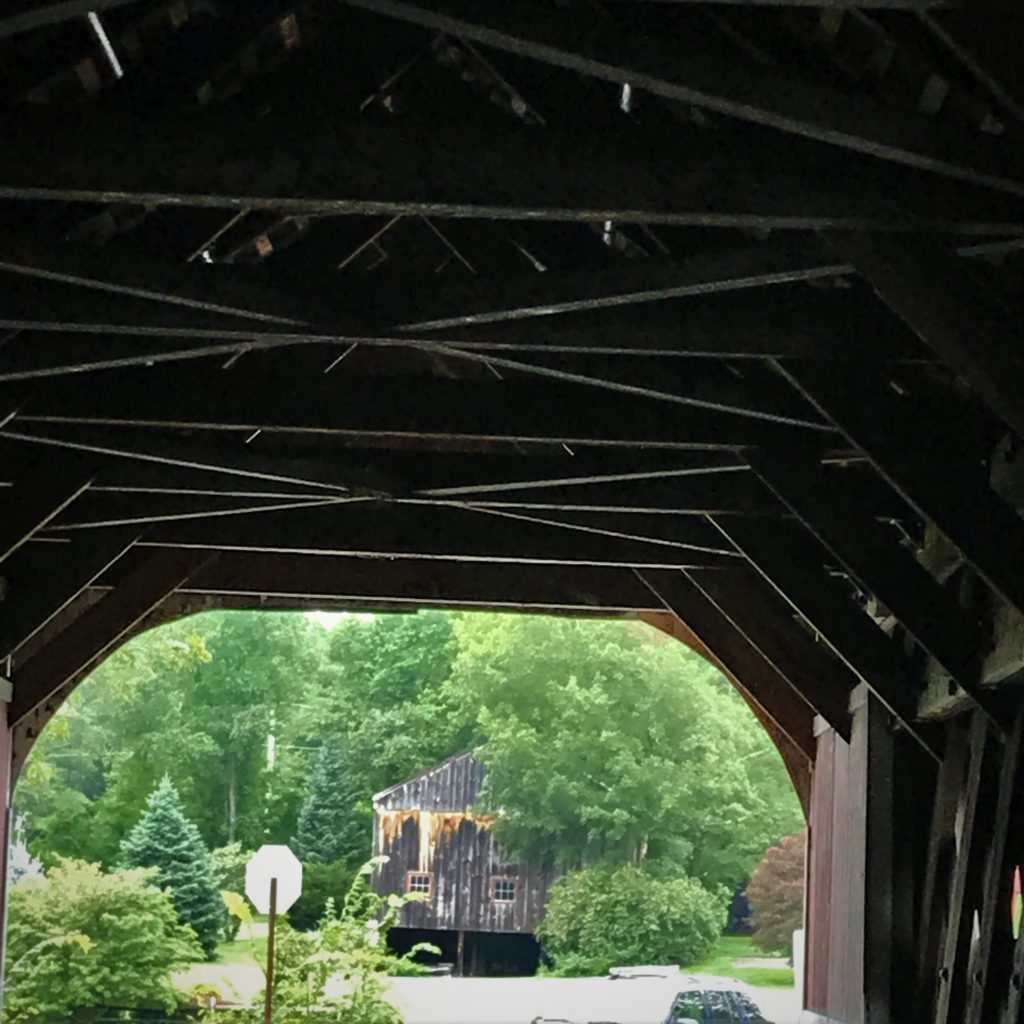 When they reconstructed the bridge in 1859, the cost was $1,735.94.  The completion of the bridge was celebrated with a big dance held right on the bridge.

Lanterns were hung from the rafters and a four-piece orchestra played.  Lunch was served at midnight and the dance continued all night long.

In 1953, the Cresson Bridge was used by Arthur Godfrey as a tie-in with a Chesterfield Cigarette Christmas Carton.

Governor Hugh Gregg flew to New York to present Mr. Godfrey with an honorary deed to the bridge making him an owner.

The Slate Bridge is located in Swanzey, NH, East of NH Route 10 on Westport Village Road.  The Style of Bridge is considered a Town Lattice Truss. The bridge was originally constructed in 1862 at a cost of $1,850.54.  The bridge was rebuilt in 2001.

The Slate Bridge gets its name from the Slate family who lived on a farm along the river north of the bridge.  It is the third bridge on this location.

In 1842, William Wheelock was halfway across the bridge with a team of our oxen when the bridge collapsed dropping both driver and animals into the river.

Although no one was hurt, Wheelock engaged an attorney from Keane to seek damages from the town.  The second bridge was damaged by a snow plow in 1987. 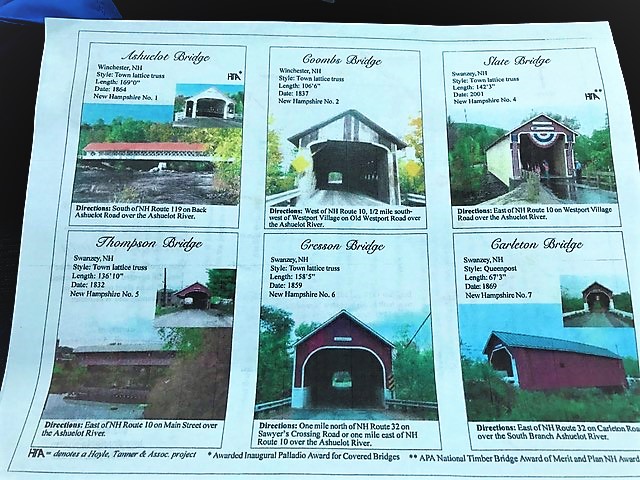 Although time didn’t allow us to drive to all the bridges, if you’re in the southwest New Hampshire area, plan to see these three if not all six of these amazing bridges! 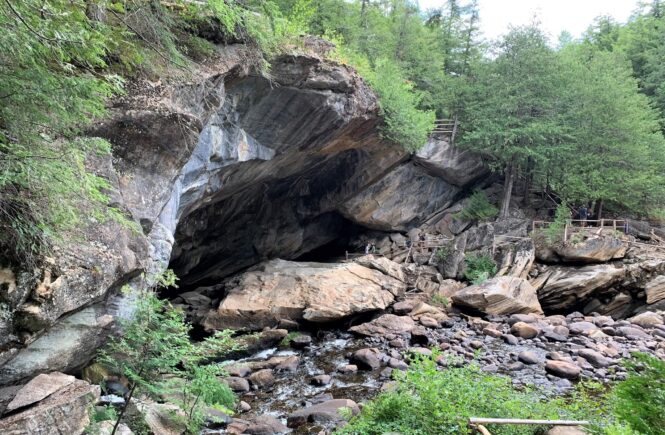 Why You Should Visit Natural Stone Bridge & Caves In The Adirondacks 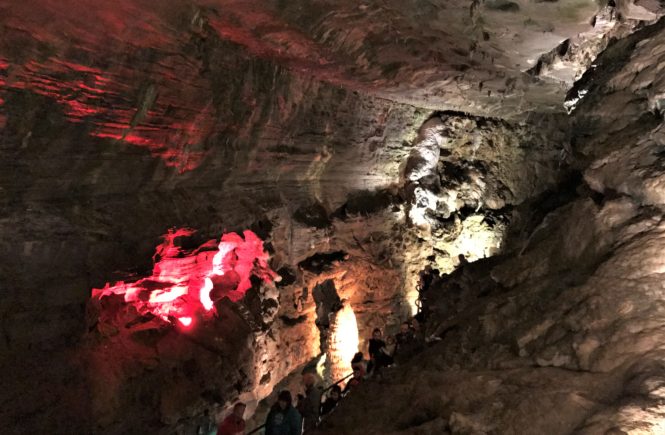 How To Plan An Awesome Trip To Howe Caverns

Livin Life With Lori is your resource for RV Life, Travel, Hiking, and Outdoor Adventures! We want to inspire you to travel more so you can live the life of your dreams!

Join me and my husband Tom, along with Buddy, our Golden Retriever, as we travel in our Jayco travel trailer and give you tips for RV camping, hiking and the best travel destinations!